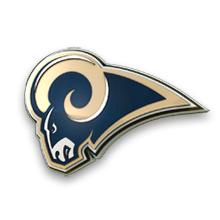 First up is HC Turner.
Coach Turner, what are the goals for this Rams team, currently at 8-1?
HC Turner: “We have the same goals as the other 31 teams, to play hard and compete, to make to the playoffs and give ourselves a shot at being the last team standing. I don’t care what our roster looks like or what the projections are, I don’t care what reports have to say. As long I am on that field my goal is to create the best team I can, to give this team the best chance possible to win a Super Bowl at the end of the year.”
Your young core has had some ups and downs. What do you think this team is capable of, this season and moving forward?
HC Turner: “It’s too early to tell for this season, were 8-1 but we play a lot of tough teams coming up. I will have a better idea of what kind of team we are after we play those games. As far as the bigger picture we are right on track. I took over for a team that had just missed the playoffs after having the top pick in the draft the year before. And Jared has been the last 1st round pick this team has made. He was able to get this team to the playoffs last season but we need to keep taking the next step. That is what it is all about building a team. You try to take at least one step forward every year. This year we really need to win a playoff game or two. Then we have two 1st round picks and two 2nd round picks next season. By next season, in order to consider this plan on track, we need to be battling with teams like the Lions and Falcons for that NFC crown, for the right to represent the conference and win a Super Bowl. “
Thanks Coach, next up, we have Tavon Austin, Jared Goff, and Todd Gurley.
Your team was the center of Commissioners Corner podcast this week. You guys form a young core group but even at 8-1 the league seems to generally consider you pretenders. What do you have to say about that?
Jared: “I don’t think we can be to concern with what other teams have to say. We try to focus only on who we are playing next, so right now there are 30 teams that really don’t matter to us.”
Todd: “Man, I just think it’s funny, what does it say about those teams? We beat you and then you come out and call us a pretender, haha, I’m not even sure what it makes those teams, irrelevant I guess. But I just want to win games, man. I don’t care what game it is preseason or Super bowl, I just want to win.”
Tavon: “It is what it is, people talk. As long as we are being talked about I think that is a good thing. The season will play out and they will get to see if we are real or not.”
What do you think you need to do as an offense to make a playoff run this season?
Jared: “Well we just need to be smart. We have a defense that will always keep us in games. They have given us a good chance to win every game this year and we have won a handful of really close ones. In our playoff game last year we let the game get away really early. We can’t let that happen.”
Tavon: “We just need to do what we do best at the biggest moments. We need to make the plays, because that is really what it comes down to, the team that makes more plays usually wins the game. “
Todd: “Like Goff said, we have a good defense. We know guys like Aaron Donald are going to show up. On offense we just need to get our playmakers the ball. Guys like Tay and me can only make plays once have the ball. We can’t be throwing interceptions.  We can’t make one mistake and let that snowball into a lot of mistakes. Our team is not designed to come back from 21 down.”