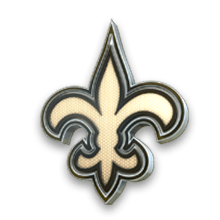 Today we will look at how the Saints first 4 weeks have gone in season 43.

The home and season opener for the season is against the Arizona Cardinals who finished at 7-9 last season and are looking to make a playoff run just like the Saints. The game started off great but ended in a loss for the Saints as they lost 14-17. With a strong start in the first quarter they got the early lead going up 14-0. After that though the offense would soon start to fall apart while the defense was maintaining and playing great. Luke Windsor would go on to throw 5 interceptions and not be able to take advantage of the turnovers the defense was getting. Besides that, Michael Thomas was able to turn 5 receptions into 121 yards and 1 touchdown. Onto the defense as they played great the whole game but as said before the offense couldn't back them up after the first quarter. The defense was able to get 3 interceptions and 5 sacks. Cameron Jordan was one of the big factors as he led the team in tackles with 5 and also had 3 tackles for loss while getting 1 sack. D'Andre Walker was a player acquired in a trade this last offseason and did not disappoint as he had 2 sacks to lead the team. He is in his contract year so he will look to step up even more to get that contract. Next is Marshon Lattimore who showed why he is a top corner in the league getting 2 interceptions. Marcus Williams had the 3rd interception for the defense. After this week the defense will look to continue playing this well while Luke Windsor will need to work on his accuracy.

The Saints next opponent is the division rival Atlanta Falcons. They have had trouble with them the last couple seasons but are hoping to change that. Unfortunately, they get dominated 7-34 and show regression more than progress from the last week. Luke Windsor continued to struggle as he only completes 8 passes out of 20 attempts and throws 2 interceptions as well. If he keeps this up the team may be forced to look for a new quarterback. The defense was picked apart this game allowing rookie Malcolm Pike to throw for 3 touchdowns while Ito Smith turned 11 carries into 143 yards. Neither the pass nor run game could be stopped this week. They did manage to get 5 sacks and continue bringing pressure. Kawann Short had 2, Deron Austin had 1.5, and D'Andre Walker had 1.5.

Still without a win the Saints take on another winless team in the Rams, both at 0-2. One team gets their first win, but it won't be the Saints as they lose a close one, 21-24. This time no one was really to blame in this game as both offense and defense played good. The Rams just were the better team this game and won it. Luke Windsor completed 22 passes out of 29 attempts for 222 yards, 2 touchdowns, and 1 interception. he was great in the first half but stalled out in the 2nd half. One player who has been struggling is Alvin Kamara who hasn't done much this season. This game he had 10 carries for only 32 yards. He also fumbled on the last drive that could have won the game or sent it to overtime. Terry McLaurin lead the receivers this week with 7 receptions for 81 yards and 1 touchdown. The defense played good as said before but if they had stopped Todd Gurley's 134 yards then the game might have been different. In the first half he was getting big run after big run but in the second half they started to slowly stop him. D'Andre Walker goes for a third straight game with a sack and Cameron Jordan adds 1 as well. Marshon Lattimore had the only interception this week. One other thing was that the defense was able to keep Kirk Cousins from throwing over 200 yards which is a plus.

Other than the game the team also resigned Terry McLaurin this week. He signs a 5-year deal worth 68 Million dollars after being traded for from the Redskins this past offseason.

This game was another close one with the Saints losing to the Steelers 17-20. Luke Windsor seems to be heading in a better direction but still needs improvement with scoring more. Alvin Kamara was actually running pretty good this game averaging 4.7 yards per carry but only had 9 carries. Why they went away from the run game is questionable. Michael Thomas and Terry McLaurin both had touchdowns this game as they continue to be the most consistent players on the offense. The defense played good but not its best letting some drives score when they had the chance to stop them. No interceptions this game but they did have 3 sacks from the veterans. Cameron Jordan had 2 with Kawann Short getting 1 sack. The defensive line stays the most consistent on the defensive side.

Through 4 weeks the Saints are 0-4 and will need a big change to turn this season into a playoff run.