The Legend of Stuart Eakin 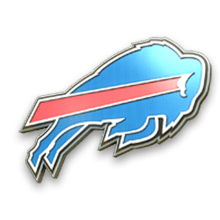 As we begin the new season, Buffalo has added a new team captain to the mix, young Stuart Eakin will wear a "C" on his chest. In what became a Cinderalla story last season, with Stuart going 7-8 in 15 games and winning three division games, Stuart showed he was a winner. Now he has had a full off-season taking all the number one reps, its time to see what he can do. Buffalo lost the home opener to Oakland behind a four touchdown and 339 yard throwing performace, it will take all three facits to win in the XCFL. Stuart shows good poise and confidence, the Bills just need to get some early season wins to build momentum. Stuart has created a strong bond with Julian Booth, DJ Thompkins, and Andy Isabella, we are hoping he brings Dallas Henderson into the group as well. So far he appears confindent in Dallas. Ten wins gives you a good chance in the AFC lets see if he can get it done! To spot the Bills a playoff spot is stuff that legends are made out of, Does Stuart have what it takes? Time will tell... #itsourtime